Perhaps the worst thing about spiders is that they are much more prevalent than most people realise. They are all around us, all the time. Don’t be alarmed. Almost all are tiny and harmless. Sadly for spiders, when they are noticed, they’re usually killed shortly after. Even in gardens, where their role as the wolves and lions of the insect world – hunters who have a crucial role in keeping populations under control – is not understood.

However, there are times when spider infestations do occur. Moreover, Australia is unique in the developed world for having many spider species that, while rarely deadly, do have rather troublesome bites – especially the mouse spider, trapdoor spider, redback, whitetail and the various kinds of funnel web.

Spiders deserve respect, as most perform an essential pest-control function.

The adult female redback is easily recognised by a deep black round abdomen with a distinctive longitudinal red stripe. The front pair of legs are longer than the rest.

The males red markings are often less noticeable and overall can look very different to the female . The body is light brown with white markings on the upper side of the abdomen and a pale hour-glass marking on the underside.

Their webs can be found in dry, dark, sheltered sites, such as among rocks, in logs, tree hollows, old tyres, sheds, empty tins and boxes, children’s toys or under rubbish.

Redbacks are mainly nocturnal and rarely leave their web, therefore they usually only bite after their webs have been disturbed.

Most bites occur in the warmer months between December and April, in the afternoon or evening.

Around 250 cases required anti-venom last year with the larger female responsible for almost all of those cases. Since the anti-venom was introduced, no deaths have been reported.

Females can store sperm and use it over a 2 year period after mating.

She can then lay up to 10 white sacs containing up to 250 eggs each. These sacs are usually suspended in the web. 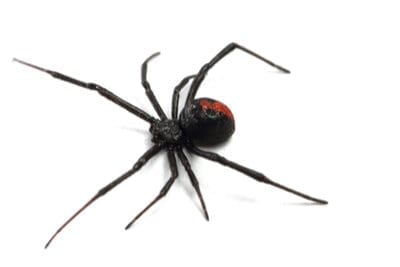 B. insignis is a dark, robust spider. The female grows up to 18 mm with a 30 mm legspan. As with most spiders, the males are smaller (10 mm), and have longer legs in relation to their body size.

In both sexes the carapace and legs are dark brown to black and the abdomen is charcoal grey with a dorsal pattern of light markings (sometimes indistinct) and a dense covering of fine, velvety hair.

The black house spider webs form untidy, lacy sheets with funnel like entrances. They are found on tree trunks, logs, rock walls and buildings (also in window frames and crevices).

The female spider never leaves her web unless forced to but keeps on repairing it. Old webs can look grey and woolly from the constant additions of silk.

Black house spiders are venomous, but are not considered dangerous. They are timid and bites from them are infrequent. The bite may be excruciatingly painful and cause local swelling.

Symptoms such as nausea, vomiting, sweating and giddiness are occasionally recorded. In a few cases, skin lesions (arachnogenic necrosis) have developed after multiple bites.

The female constructs several white silk egg sacs, which are secured within the web retreat. The female stays with the eggs until they hatch.

The spiderlings then disperse. Occasionally the young spiders stay in the web of the mother for some time, catching the smaller prey that the larger spider would ignore. 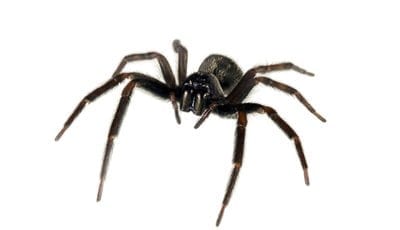 Brown to dark brown in colour and heavily covered with fine hairs, trapdoor spiders are often mistaken for funnel-web spiders.

The male has distinct boxing glove-shaped palps, that is, the two “sensory feelers” at front of it’s head.

This spider is a ground dweller, with a burrow retreat lined with silk of up to 250 mm in depth and around 25 mm in width. The entrance can be difficult to detect as it can be very camouflaged.

Not all trapdoor species have a trapdoor lid covering their holes, although they all live in burrows. Trapdoor spiders spend much of their time in their burrows with males wandering during mating season.

These spiders tend to be quite timid, although the male may rear up if threatened. They are not considered aggressive and their bites are not dangerous.  Localised pain and swelling may occur.

Mature male trapdoor spiders wander during humid weather in search of a mate. Mating takes place within the female’s burrow.

The male usually escapes being eaten in order to mate with several females, before dying. 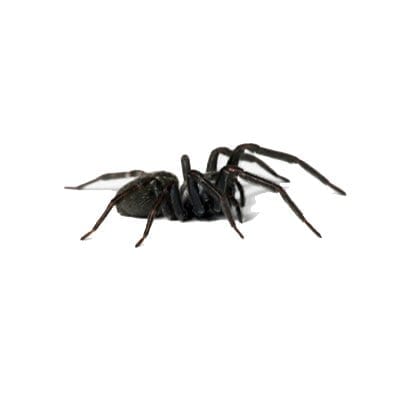 They have cylindrical abdomens, grey to black bodies with dark orange-brown banded stout legs and a white patch at the tip of the abdomen.

They are not web builders but vagrant hunters and are often seen inside houses, especially on summer evenings, wandering at night in search of prey.

White-tailed spider bites typically cause initial burning pain followed by swelling and itchiness at the site similar to an insect bite.

Occasionally, cases of blistering ulceration have been reported and some medical studies suggest that this may be due to a secondary infection of the wound.

White-tailed spiders lay eggs in a disc-shaped egg sac, containing up to 90 eggs.

They lay these sacs in dark and sheltered places where the females guard their eggs until they hatch. 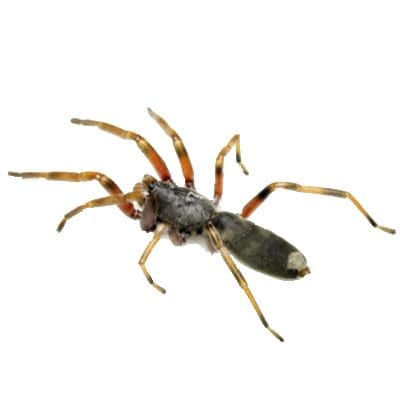 They are probably the best known spiders world wide. They are almost always associated with human dwellings, famous for their small, dainty bodies with long legs up to 50mm in length.

These spiders are often found in the house or shed with their thin, tangled webs behind doors or attached to ceilings and upper walls in the corners of rooms. The non-sticky web of the daddy long-legs is really just a retreat for the spider and not designed to catch prey.

The web has no adhesive properties but the irregular structure traps insects, making escape difficult. The spider quickly envelops its prey with silk and then inflicts the fatal bite.

These spiders are harmless but, quite incorrectly, renowned for being deadly poisonous. Although their venom is quite toxic, their tiny fangs are incapable of penetrating human skin and the venom glands hold so little poison that it renders this distinction as merely mythical.

The female lays eggs and may sometimes hold her eggs in her palps (short, leg like structures attached to the front of the cephalothorax, between the fangs and the first pair of legs)

They are typically long-legged (females can reach sizes up to 15cm across the legs) with forward facing legs and are known for their scuttling sideways gait.

The huntsman comes in a variety of colours and patterns but are mostly brown, black and grey (there are over 100 species of huntsman spiders in Australia).

These large, hairy grey-brown spiders have flattened bodies and are found throughout Australia, preferring to live outside under the bark of trees or under rocks and logs on the ground.

They have been known to inflict defensive bites, however these are uncommon and are not widely regarded as dangerous to healthy humans.

The female huntsman produces a flat, oval egg sac of white papery silk and lays up to 200 eggs. She then places it under bark or a rock and stands guard over it, without eating, for about three weeks.

At the appropriate time, the mother spider opens the egg sac to help her spiderlings out and she may stay with them for several weeks. The lifespan of most huntsman species is about two years but it can be more. 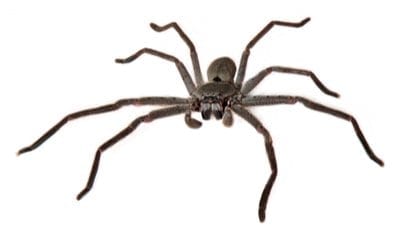 Most wolf spiders are typically drab brown-grey with variegated black or fawn patterns on them.

They are also known as lawn or garden wolf spiders by some, as this is where we often encounter them. Most wolf spiders are wanderers but some build burrows, either with or without a trapdoor entrance.

They are not dangerous to humans, although they can give a painful bite which has been known to cause blistering skin lesions and infection.

Wolf spiders are unique in the way that they carry their eggs. The egg sac, a round silken globe, is attached to the spinnerets at the end of the abdomen, allowing the spider to carry her unborn young with her.

Immediately after the spiderlings emerge from their protective silken case, they clamber up their mother’s legs and crowd onto her abdomen. 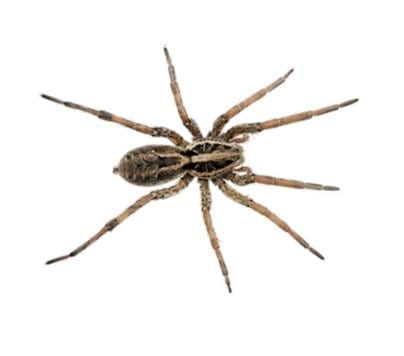 These stout, reddish-brown or grey spiders have a leaf-shaped pattern on their fat, roughly triangular abdomens. They sometimes have a white or brown dorsal stripe.

The spiders’ heads and proximal (closer to the body) leg segments are usually darker, mostly reddish or reddish brown.

They build their webs at dusk and usually remove all but a single strand in the morning, when they retreat to surrounding shrubbery where their camouflaged bodies are rarely seen.

Webs are placed in openings between trees and shrubs where insects are likely to fly.

Reluctant to bite, their bite is not dangerous to humans but may induce mild local pain, redness and occasionally swelling for a period of 30 minutes up to three to four hours.

A female lays her eggs in late summer to autumn. The eggs are encased in a fluffy silken cocoon and attached to foliage. The spiderlings hatch during autumn and disperse by ballooning (floating on the breeze using small silk strands as “balloons”) and build their own tiny orb webs among vegetation to wait out the winter. 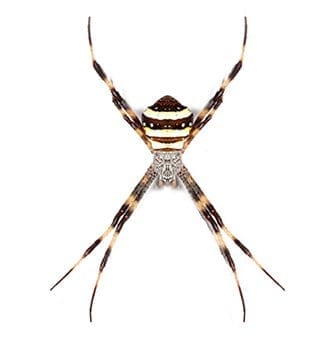